Home / Online Casino Games – Are they any good? / Poker – Mixture of skill and luck / Poker Rules – Guide for Beginners

Are you looking for simple poker rules for beginners? Despite the staggering range of poker variations, there are a few useful tricks and standard features that give a card game the right to be called poker. And a good thing that there are some shared features, too, otherwise we’d have to relearn poker rules and hands every time we wanted to play a game with our friends or place a few bets at our favorite casino.

So, since there are plenty of different games that use the same basic rules, it’s worth our while looking at the basic rules of poker. Online games follow the same rules, so there’s no major problem there, meaning that if you understand one game, it’s easy enough to understand them all. With that being said, let’s start off with one of the more intricate problems: what do the various combinations of cards mean, or, in other words, can someone explain the game rules? Yes, indeed, we can!

The good thing is that, regardless of whether you’re playing online or offline, you can expect the same thing. The rules for playing poker online are fairly standard, so it’s all good, making it easier to learn this great game.

The hands in poker are relatively straightforward, and many of them have come into everyday parlance for various reasons. With some exceptions, rules state that cards are ranked according to their face value, and typically, aces are the highest cards, but they can also be worth 1 if part of a straight. The value of the cards is important if 2 or more players have the same hand, such as 2 players with a pair each, or something similar. 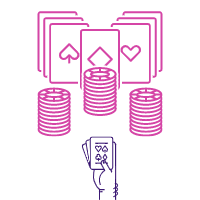 Hands in poker are determined according to the official poker rules. Regardless of the game being played, hands comprise the 5 strongest cards a player can use. Hands can be broken down as follows: the lowest-value hand is a high card, where there are no matching cards or sequences. On this hand, the highest-value card determines the value of the hand, with an ace being the “strongest” card in this case. The next hand is one pair, which is exactly what it says – 2 matching cards, and 3 other, non-matching cards. Thereafter, you have two pairs, which are typically described in terms of the higher “over” the lower pair (e.g. two pairs, aces over kings). These 3 hands are the most common in both 5- and 7-card games. The following hands are also found in the rules. For beginners, though, they might only make an appearance if you’ve got “beginner’s luck.”

Three of a kind is a nice little hand to have, giving you 3 of the 4 cards of the same rank in a hand. The next hand is straight, which is 5 cards in sequential rank. This is the only time when an ace can be “low” instead of “high,” making it a bit difficult to know the rules. Higher than that is a flush, where there are 5 cards, all of the same suit. Winners are determined by the highest card in the hand. After a flush, you get a full house, which is 3 of a kind and a pair in the same hand. You can talk about them being “three of a kind full of pair,” so if you heard “full house, fives full of queens,” you’d know that it was a hand with 3 fives and 2 queens. Four of a kind is all four cards of the same rank in a hand, and finally, you get a straight flush, which is 5 consecutive cards, all of the same suit.

So if you need to learn basic poker rules, that’s the most important part out of the way…
Oh, yes! If you’re unbelievably lucky, you can get a royal flush, which is an ace-high straight flush and is often considered to be a separate hand entirely. Although there are 4 possible royal flushes, this only crop in 0.0015% of hands, so you’d be very lucky to get one of these.

There are many different types of poker, but you can divide them roughly into 4 different types of games. There’s straight poker, in which players are dealt 5 cards and bet on the hands, with no changes allowed. Then there’s draw poker, where players can change cards in their hand before betting. This is perhaps the most famous version of the game. The rules of poker games such as these are very easy to understand.

There’s also stud poker, in which each player is dealt a separate hand of 5 to 7 cards, some face-up and some face down. A variation on the stud is community poker like Texas hold ’em, in which players are each dealt 2 cards face down, and then have to create the best hand from the community cards in the middle of the table. These poker card game rules are a bit trickier, but still quite simple to get the hang of.

If you’re playing in an online tournament, there are a bunch of things you should bear in mind. Firstly, there’s probably going to be a table limit of sorts, and, if it’s a big tournament, you may have to play the H.O.R.S.E. games – Hold ‘em, Omaha, Razz, Seven-card Stud, and Seven Card Stud hi-low split Eight. Rules do vary from tournament to tournament, but a lot of them are the same regardless of the online casino. Don’t play in the same location as someone else, don’t cheat, and play honestly. There will usually be an entry fee for big online tournaments, so if you want to play, you have to pay, unfortunately. It’s usually not exorbitant, though, so don’t worry too much.
Rules are subject to table limits, unfortunately, but that’s good if you’re trying to watch your cash flow. Look for a place where you can play for big wins without betting the house… 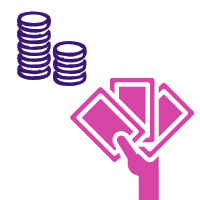 Don’t worry, though, if you’re new to this whole game. It’s not as difficult as it looks, especially the poker dealing rules. Just give it a bash, and if you make a mistake or something, it’s not the end of the world. It’s especially good if you’re playing online, as then you don’t need to worry about burning cards or anything like that. Simply read up on your favorite game, work out how the rules function, and then put on your best poker face!

How do you play basic poker?

Learning how to play basic poker is not as hard as some people imagine. The rules are simple and easy to follow. For instance, in stud poker, each of the players will be given 5 cards and poker chips. Someone who happens to bid the biggest amount of chips wins unless another player wants to match the bet – if that happens, these two players should reveal their cards, and the one who has the best hand wins. It really is as easy as it sounds, unless you’re playing with someone who is a high-quality player, who makes things a little complicated for you.

Can you fold whenever you want in poker?

Yes, as long as it is your turn to act in the game, it is possible for you to fold. Folding basically means that you are out of a certain hand and no longer need to put your money for that hand. Sometimes folding is also referred to as muck or lay down, depending on who you are playing with.